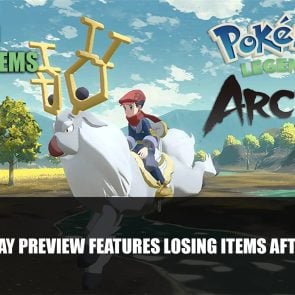 Nintendo has released the full English version of the Pokemon Legend Arceus trailer that was released in Japaned earlier this week. New mechanics including what happens when your trainer faints, getting around Hisui, sneak mechanics and more.

Earlier this week a new trailer was released for Pokemon Legends Arceus in Japanese, but a new English version goes over the details about what’s coming in the new entry. It reveals sneak mechanics when capturing Pokemon, the consequences of fainting for your trainer, traveling Pokemon in the open world,  and more. Here’s everything that it covers.

While traditionally in Pokemon games players can discover items out in the field such as Poke Balls, potions and more, in Legends players will have the opportunity to gather materials to craft items. Using your own Pokemon, you can aim at objects that materials can be gathered from, such as breaking rocks to gain materials like Tumblestone shown in the trailer. You can gain materials by gathering wild plants, beating or catching Pokemon, or knocking items out of trees.

To craft items trainers will need to visit their Camp where a crafting menu will be available from your inventory box. What’s interesting is instead of buying Poke Balls from a merchant, you can actually use the gathered materials to craft them. The example shown in the trailer features using Apricorn and Tublestone to make an ordinary Poke Ball. Pokeballs in Legends have a unique look them as they feature a latch type closing, in a sort of steampunk style. 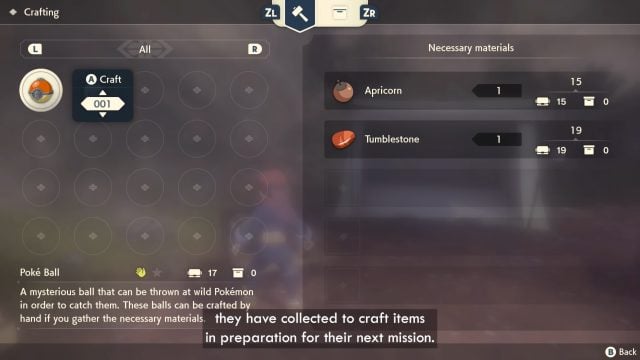 Pokemon in Legends will act very different than seen in previous game titles, as each has its own temperament. Some will are more skittish meaning they will run away upon your approach such as Starly, while others will straight up ignore you (thanks Bidoof). But not all are so passive, some Pokemon have more aggressive tendencies meaning they will attack you if they spot you, so trainers be wary as there will be consequences if you are downed, but more on that later. 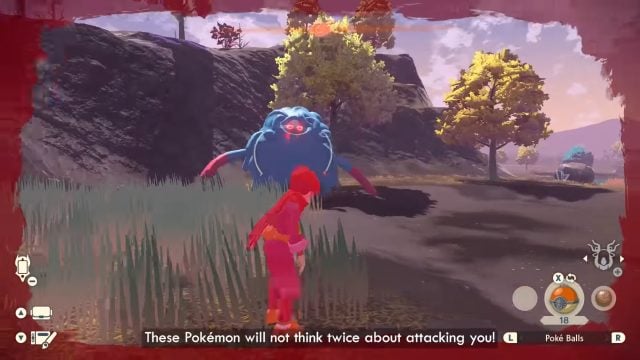 Aggressive Pokemon will cause damage to trainers

Using items you can strategise ways to capture unsuspecting Pokemon. Using the grass to hide in and tossing a berry to a nearby Pokemon will distract them, giving you the opportunity to throw a Poke Ball their way, meaning possibilities to skip a battle. It also shows in the gameplay preview that your own Pokemon will still gain shared EXP this way. 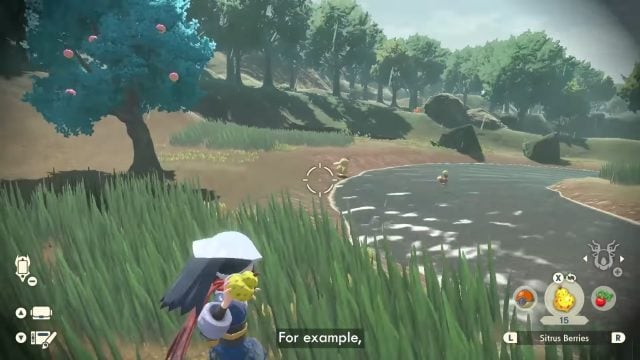 Engaging a battle with a Pokemon takes on the usual turn-based combat, however new mechanics include fighting styles Agile and Strong Style approaches to battle. Using an Agile Style will raise action speed but lower move power, making the next turn come sooner. While using a Strong Style approach will raise the move’s power but lowers the Pokemon’s action speed, it also uses more PP. Using a mix of moves to be victorious.

One key mechanic shown is when aggressive Pokemon attack trainers. Players will need to be on their toes and dodge their oncoming attacks because taking too much damage will result in a blackout, and losing a few recent items. This new mechanic will definitely throw a spanner in the works when you’re out and about trying to catch Pokemon, making being a trainer that more challenging in their cross between action and turn-based game. 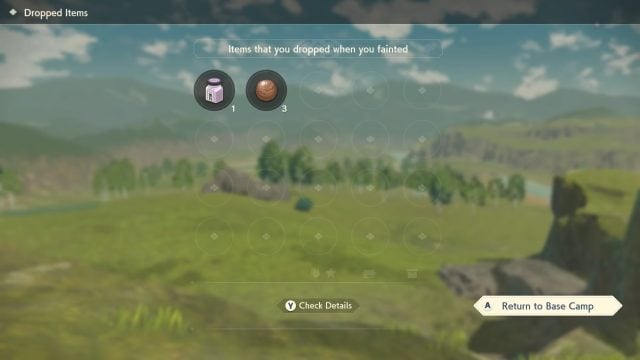 Items can be dropped when your trainer faints

Legends gains new ways to travel especially with the soaring bird Pokemon Braviery from the Hisui region, which takes on an almost Zelda-esque glider method of transportation. This isn’t the only way to get around as you can traverse water with the Bascluegion and ride on the back of a Wyrdeer. 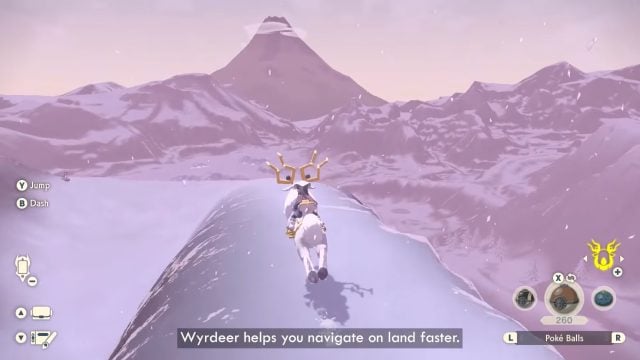 Home to the Galaxy Expeditions Center which you are a member of, Jubilee Village will also be a way to pick up Survey missions. You can also visit a number of different stalls such as the Clothier, Craftworks and Trading Post for trading Pokemon with other players.

Players can also take on small tasks called Requests in order to gain rewards such as Poke Balls or materials. Missions are treated as main quests, advancing Legends’ main story. These can be tracked using the Arc Phone. 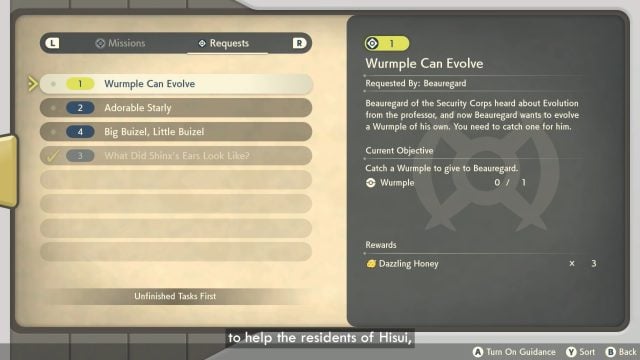 As Pokemon Legends Arceus is set in a different time to previous titles, character clothing style is following a more traditional approach featuring kimonos. You can also visit the hairdresser to change hairstyles, changing up your character’s appearance. 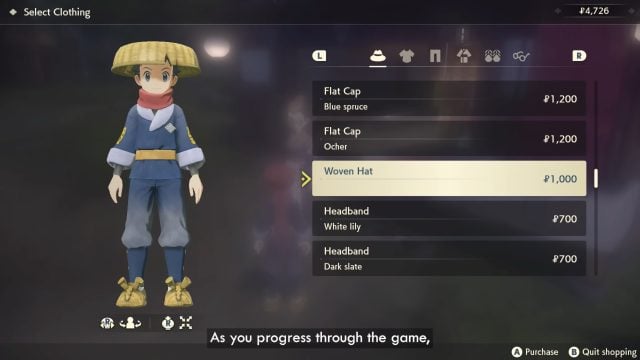 Trainers get to encounter Noble Pokemon, as a mysterious phenomenon is causing Pokemon to rampage. Your job as part of survey core to soothe these Nobles. In order to do this players will need not only to battle them but to throw blams to calm them. This combines the action side of the game with the more traditional Pokemon elements. The task might sound easy, but trainers will need to dodge and avoid this powerful Pokemon’s attacks in process, as well as avoid being knocked out. From the preview, it looks like there is a health bar that you will need to reduce, and at the right moment you can engage in a Pokemon battle. 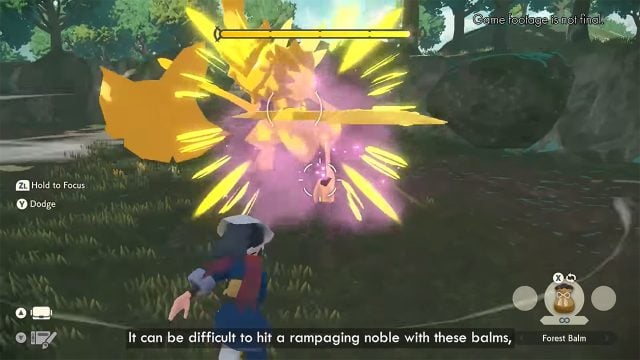 Noble Pokemon provide of a challenge as they attack trainers

The new mechanics look to shake up the Pokemon franchise, adding action-based combat to a turn-based RPG. The open-world seems quite fast as the need for a mount Pokemon to get round gives some Breath of the Wild vibes. What do you think of the new mechanics? Are you excited for Pokemon Legends Arceus? Let us know in the comments below.

If you want to find out why Pokemon Legends Arceus made our Top 5 Upcoming RPGs of January 2022 and what other titles are releasing find it here. For more news check out next